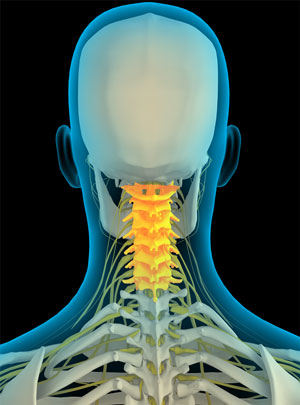 Anatomy of the Spine

The spine, also called the backbone, plays a vital role in stability, smooth movement and protection of the delicate spinal cord. It is made up of bony segments called vertebrae with fibrous tissue called intervertebral discs between them. The vertebrae and discs form the spinal column from the neck to the pelvis, giving symmetry and support to the body.

Parts of a Vertebra

A single vertebra is made up of two parts, the front portion is called the body and the back portion is referred to as the vertebral or neural arch. The body is cylindrical in shape, strong and stable. Two strong pedicle bones join the vertebral arch to the body of the vertebrae.

The spinal canal is formed by the placement of single vertebral foramina one on top of the other to form a canal. The purpose of the canal is to create a bony casing from the head to the lower back, through which the spinal cord passes.

The spine can be divided into 4 parts: cervical, thoracic, lumbar and sacral region. The cervical spine comprises of the first 7 vertebrae, which form the neck.

The cervical spine is highly mobile compared to the thoracic or lumbar spine. In contrast to other parts of the spine, the cervical spine has transverse foramina in each vertebra through which the vertebral arteries supply blood to the brain.

The upper cervical spine comprises of the atlas (C1) and axis (C2), which are different from rest of the cervical vertebrae. The atlas vertebra articulates with the occiput superiorly at the atlanto-occipital joint and with the axis inferiorly at the atlantoaxial joint. Generally, the atlantoaxial joint is accountable for half of the cervical rotational movements; while the atlanto-occipital joint is responsible for half of the flexion and extension movements of the neck.

In contrast to other vertebrae, the atlas is ring-shaped without a body. The odontoid process or dens of the axis represents the fused remnants of the body of the atlas. The transverse ligament firmly opposes the odontoid process to the posterior portion of the anterior arch of atlas and provides stability to the atlantoaxial joint.

The atlas comprises of a thick anterior arch, a thin posterior arch, two prominent lateral masses, and two transverse processes. The transverse process surrounds the transverse foramen, through which the vertebral artery passes. A zygapophyseal joint is present on the superior and inferior aspect of the lateral mass. The superior articular facets articulate with the occipital condyles and are kidney-shaped, concave, projecting upward and inward, while the inferior articular facets are comparatively flat, projecting downward and inward, and articulate with the superior facets of the axis.

The axis possesses a large vertebral body with the odontoid process or dens. It also has heavy pedicles, laminae and transverse processes that help in the attachment of muscles.

The intervertebral discs are flat and round, present between the lumbar vertebrae and act as shock absorbers when you walk or run. There is a soft, gelatinous material in the center (nucleus pulposus) that is encased in strong elastic tissue, forming a ring around it called annulus fibrosus.

Facet joints are synovial joints that give the spine it's flexibility by sliding on the articular processes of the vertebra below. Compared to other parts of the spine, the joint capsules are quite loose in the cervical region to facilitate smooth movement.